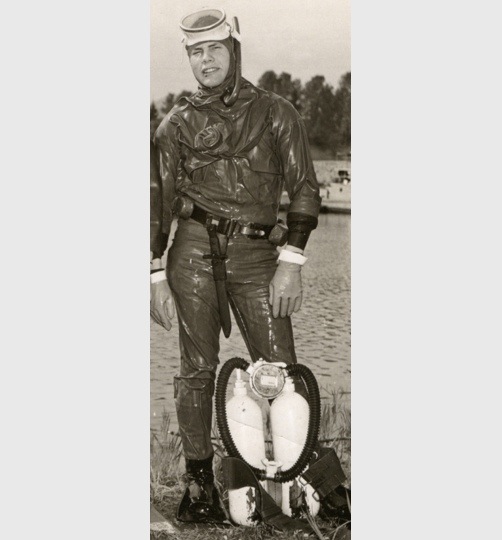 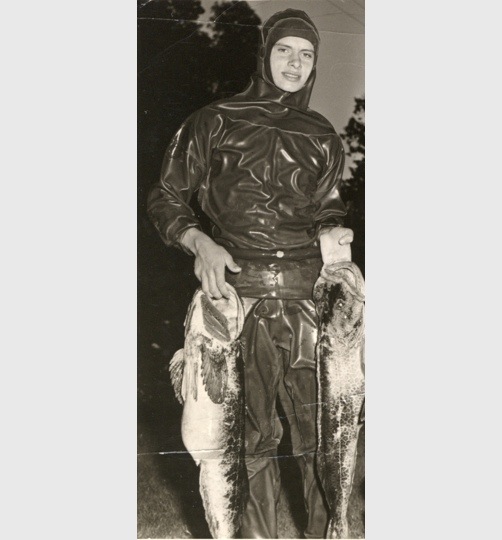 A very young Phil Nuytten with a 2 piece (waist entry) ‘Ply-a-bel’ Bel-Aqua suit. The waist seal is single-ply rubber and is quite fragile: note patch in center. Photo: Jim Willis, 1953.

Bel-Aqua Watersports Inc. was founded and owned by Bill Barada of Santa Monica, CA. Bill's day job was as a fireman and he was one of the founders of a popular skindiving club called the Sea Lancers of Santa Monica. He was an avid skin-diver (breath-hold) and spearfisherman in the late 1940's and had tried some surplus UDT 'frogman' suits (these were made under military contract by U.S. Rubber) but found them very poorly cut for swimming and almost impossible to keep leak-proof. He and several friends built their own versions out of gum rubber hospital bed sheeting and Bill's were so good he wound up taking orders for suits that he hand-built at home. This soon expanded into 'Bel-Aqua' - first in a small shop and later at a larger shop on West 54th Street in Los Angeles.

His original suits were back entry, then front entry, then two piece (waist entry), with the front entry by far the most popular. He was soon ordering batch lots of calendared, vulcanized rubber and had it pigmented a trademark dark green. By 1952, he convinced a rubber formulator to develop a two ply material that was gum rubber on the inside (white) and a rubber/plastic compound on the outside (green). He called this material 'Ply-a-Bel' when it was introduced in early 1953. I remember it well, because I ordered my first Bel-Aqua suit from him in '53 and they were sold out of front entries in the new material - so I could have the old single-ply in front entry or the new stuff in a two-piece suit. I didn't like two-piecers because the waist seal material was very thin and fragile on the better suits (like Pirelli) and thick and hard to seal in the lesser models (like USD 'Seal Suit'). I liked front entries but decided to go with the new material in two-piece. The alternative was to wait - which, because I was a kid, was no alternative at all!

In 1957 Bel-Aqua introduced a radical new wet-suit design patterned after a bullfighter's garment and called it the 'Toreador' design. It was an incredible break-though for us guys up in the Pacific Northwest, the divers in the Northern Great Lakes and the New England guys. For the first time, we could use custom-made, really form-fitting wet suits instead of dry suits. Bel-Aqua made them in 3/16th rubatex material and sold them in kit form - it didn't take any of us long to figure that you could get Rubatex in 1/4 inch and use the same Toreador pattern.

In 1957, I opened the first skin-diving shop in western Canada in Vancouver, B.C. and called it 'Vancouver Divers Supply' (not terribly original!) I ran it after school (high school) and on weekends. I was a dealer for Bel-Aqua and used to talk to Bill quite often. He had branched into accessories to go along with the original 'Bel-Aqua snorkel': speargun stuff, masks, fins, etc. He became very interested in U/W photography and bought himself a 16mm Bell & Howell and a Sampson housing - I had a 16 mm Bolex in a Bolex housing and we had many good 'discussions' on which was best! Oh, yes, I should mention the ill-fated 'ply-a-foam'. The 'skin-two' rubatex was quite fragile (no nylon lining in those days) and tore easily - particularly since the early suits were 'pull-overs' (no zippers) that required your buddy pulling to get you out of the skin-tight suit - not unusual to tear an arm off the suit if he wasn't careful. Bill figured the answer was to glue his dry suit material to the rubatex foam neoprene. He called the new material ‘Ply-a-Foam’. It was not the answer. It was not even an answer. It was a dud. It was nearly impossible to keep the neoprene glued to the gum-rubber and if it didn't delaminate, the suit was stiff as a board - like wearing a suit of armour! Not a winner at all.

Bill made a number of trips up to the Northwest, to film and it was always a pleasure to see him here or on my frequent trips to California. Later, Bill decided to sell the business – around 1958, I believe. He cut a deal with Swimster’s Dick Bonin for ‘Bonny’ to buy the highly respected Bel-Aqua name, but I don’t think the deal was ever finalized. Around that same time, the company that had carried out manufacturing as an OEM (original equipment manufacturer) for Bel-Aqua decided to enter the sales-end themselves, with their own version of the Bel-Aqua line of products. They called their new company ‘Aquala’. This led to some disagreeable stuff (this is really more the Barada family's private affair now and not something I have any right to expound or conjecture on).

Bill Barada was a true pioneer in the dry suit biz - he was a good author also, writing tons of stuff for ‘Skin Diver Mag’, ‘Waterworld’, etc. He wrote a couple of diving how-to books and ghost wrote one book, and also collaborated with Lloyd Bridges on ‘Mask and Flippers' - a book rushed out to capitalize on the 'Sea Hunt' craze of the late 50's. Bill died in 1998, and though he had written a number of books, as mentioned, he never did an autobiography and that is a real shame. If there ever was a skin diving pioneer who deserved a book, or at least a full monograph, it was Bill Barada.

I still have about a dozen Bel-Aquas and Aqualas from that period - all the different types. The distinctive smell of that 'ply-a-bel rubber always brings back a lot of memories.