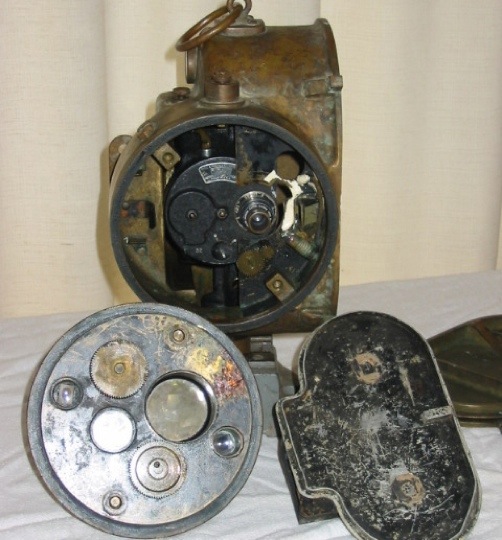 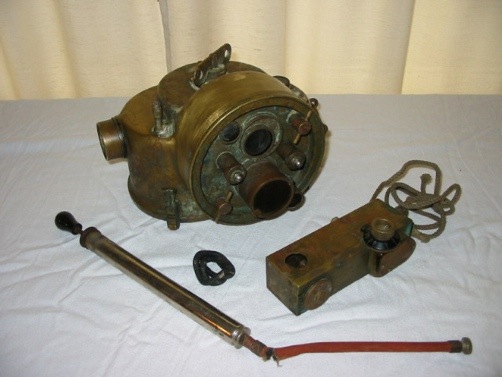 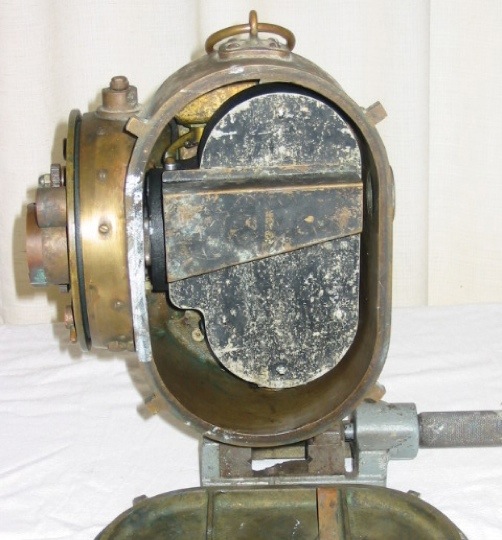 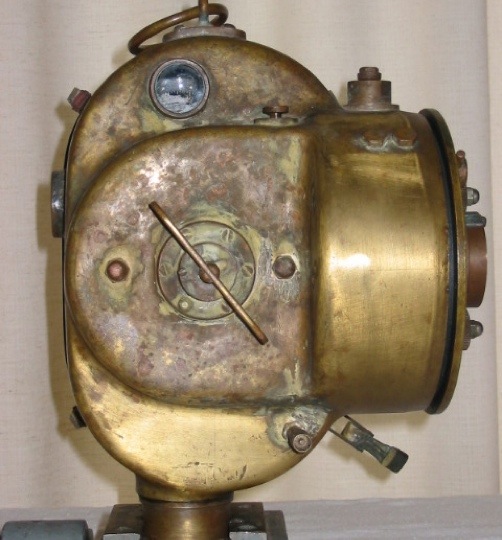 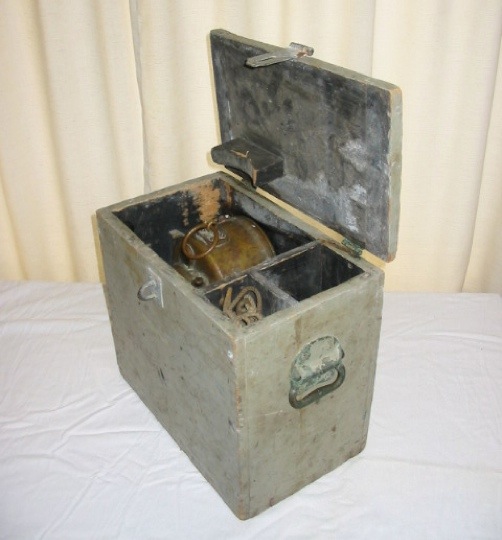 It is a very skillfully crafted, close fitting, cast bronze (20 lb.) submarine housing for a Bell and Howell “Filmo” Model 70-A, 16mm movie camera. This camera was offered between 1923 and 1929 and was a single lens version of the subsequent model 70-D, made famous as the preferred war camera of Allied WW II cine-journalists. In the 1920’s these cameras sold for $180.00 – a substantial amount, considering that the average family income was $25.00 per week, a basic Ford Model “T” cost $300.00 and a brand new 3 light, 5 bolt/12 bolt divers helmet from Morse was $200.00. What this housing cost and who might have wished to chance their expensive cine-camera in it are at this point unknown….

This housing (shown in the photographs with a 1927 Filmo Model 70-A camera fitted with the provided modified side case and view-finder), came securely stored in a robust, custom fitted wooden chest, along with a small selection of spares, and, unbelievably, a submarine optical range finder of similar bronze construction, calibrated to determine distances of between 1.5 and 20 feet! We assume that this would prevent the erstwhile submarine cinematographer from having to plod off a focal distance and possibly foul his helmet’s airline on the support line of the camera (note the substantial lifting ring on the top of the housing). Cunningly fitted within the front cover of the housing, a small battery-powered light bulb illuminates the focus ring of the camera’s lens to aid the diver in making the appropriate adjustments via the focus knob which penetrates the front cover adjacent to the lens port.

This front cover has two individual lens ports, each with a focusing knob. This would have allowed the use of a number of the many lenses of varying length available to this camera. However, to utilize the alternate lens port length, the entire front cover assembly must be removed and rotated 180 degrees.

A large key, penetrating the housing through a gland, is provided to allow rewinding of the internal clockwork mechanism of the camera every 35 to 40 seconds of filming. This simple action (!), repeated a considerable number of times, would allow the diver to shoot the entire 100 feet of film that the unit could carry. This feature again indicates the age of this unit, as only the earliest of the Filmo Model 70 cameras had a key which could be removed in order to allow the external housing key to engage the camera. The film length remaining is monitored by the diver, who would sight the film dial through the small glass port fitted above the winding key, aft and above the shutter release button.

Due to the use of flat gaskets and conventional gland packing in this housing, the manufacturer has thoughtfully provided a small air pump and fixed Schrader fitting to allow (we assume) a slight positive pressurizing of the unit prior to submerging, probably a very prudent idea!

Unfortunately, there are no maker’s marks on the housing and no remaining identification on the wooden chest to aid in our search. However, there were remnants of two shipping labels still attached to the case dated 1929 and 1939, which corroborate our dating estimate.

It is our intent to carefully refurbish this housing and shoot at least one roll of film on an upcoming historical diving rally.

If anyone out there has any information regarding this early underwater camera housing, we would love to hear from you! You can contact using the form below.