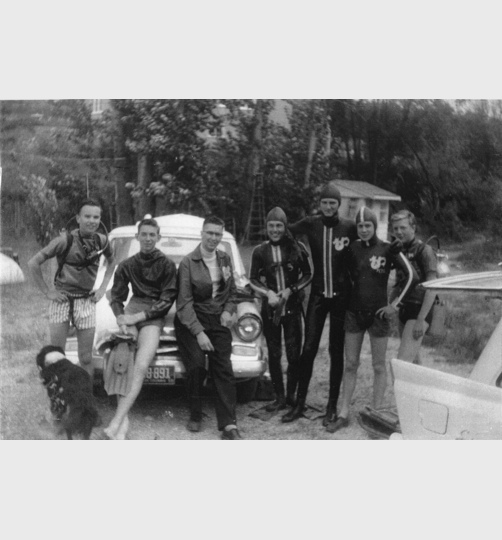 Named after the monster of Lake Okanogan.

Lake Okanogan is a large, deep lake in the interior of British Columbia, Canada’s most westerly province. The lake covers approximately 135 square miles and goes down to at least 820 feet – a perfect place for a monster to lurk, and this lake has one: called ‘Ogopogo’. The monster was well known to the Salish people who called it ‘N’ha-a-itk’. (The name ‘Ogopogo’ came, not from their language, but from a novelty song of the 1920’s.) Reportedly sighted by hundreds over the years, ‘Ogopogo’ is reported to be a serpentine, 5-75 feet long, about 1 ½ feet thick, dark green and having a head like “a horse with a beard”.

In 1954 a dive club was formed by three intrepid B.C. divers: Lance Tanner, Gordon Heck and Ed Slater, all of the lakeside town of Kelowna, BC. The name of the monster of Okanogan Lake seemed like a great tongue-in-cheek name for a dive club, and it told anyone in BC exactly where the club was located, since ‘Ogopogo’ was as well-known in Western Canada as the ‘Loch Ness Monster’ was in Scotland. (But on a grander scale: Lake Okanogan is nearly ten times bigger than Loch Ness and about the same depth.)

Club president Lance Tanner sent this picture of a typical outing. The diver in the centre remains unidentified – as does ‘Ogopogo’. If you want to know more about this beastie, check out the Japanese TV show called ‘The World’s Supernatural Phenomena’ and see the lake bottom from the submersible ‘Deep Rover’. Or check out segments of ‘Unsolved Mysteries’ and ‘Inside Edition’. When Lance Tanner was asked if he ever saw anything like ‘Ogopogo’, he paused and said, “Uh, no.”